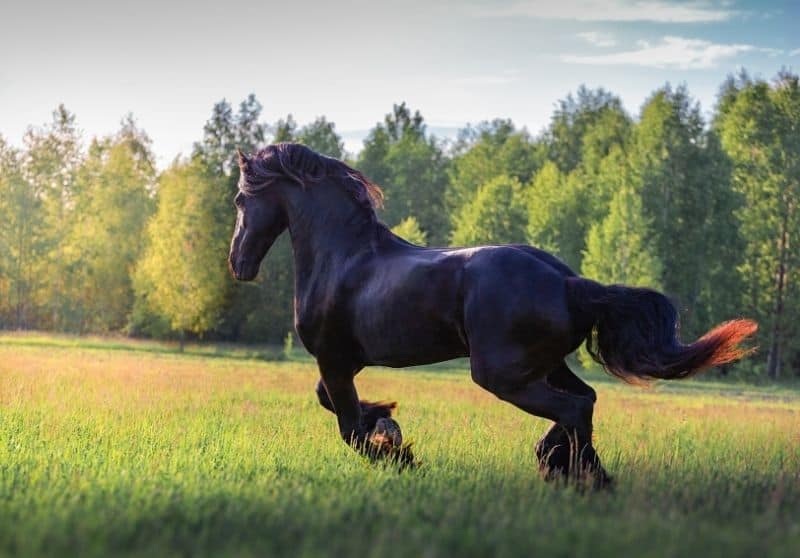 All You Need to Know About Friesian Horses

We’ve all seen them; dark horses with flowing manes galloping across our T.V. screens, the main character riding them into the conflict. These horses exude fantasy, romance, and magic. These horses are members of the Friesian horse breed.

Friesians are big warmblood horses with the muscularity of a light draft horse and the agility and movement of a hot-blooded horse. Registered Friesians must be black in color with no white markings. These horses have a rich history as warhorses and workhorses. Due to their exaggerated movements, they excel in the dressage arena, and their magical appeal makes them popular mounts in the entertainment industry.

Many equestrians dream of one day being able to ride or own a Friesian horse. To get the complete rundown on why these horses are so unique and loved, keep reading!

The Friesian horse breed has been carefully and meticulously bred over the last centuries to ensure the purest warmblood horses, all with matching black coats. For this reason, DNA samples and pedigree records must be provided when officially registering a Friesian horse with the association.

Why are Friesian Horses Black?

Registered Friesian stallions used for breeding must be DNA tested to ensure they have a black homozygous gene. This gene will ensure that their offspring come out with the same black coat. If the stallion does not have this gene, then it cannot be used to breed an official registered Friesian bloodline. While this may seem a bit too meticulous, it is done to preserve the breed and its qualities.

Can a Friesian Horse Have Any White Markings?

Due to the very selective breeding and coloring that is required for a Friesian to be officially registered as such, a true registered Friesian will most likely not have any white markings or coat patterns. The exception would allow for a white small star on the horse’s forehead.

At this point in time, a Friesian born with white markings or a different coat color other than black cannot be registered as a Friesian. This means that if the horse has white socks or a blaze on its face, it will not be able to be registered.

Can a Friesian Horse Be Another Color Other Than Black?

A registered purebred Friesian cannot be any other color than black. There was a point in time when a certain gene shared by a Friesian dam and a Friesian sire would produce a purebred chestnut Friesian offspring; however, the selective breeding of Friesians has become more strict to rid the breed from that gene.

When some Friesian foals came out with a red coat instead of black. These horses were known as “fox Friesians.” They were the result of both the dam and the sire sharing a red heterozygous gene. Friesian stallions had to start DNA testing for a homozygous black gene to ensure their offspring would come out black. 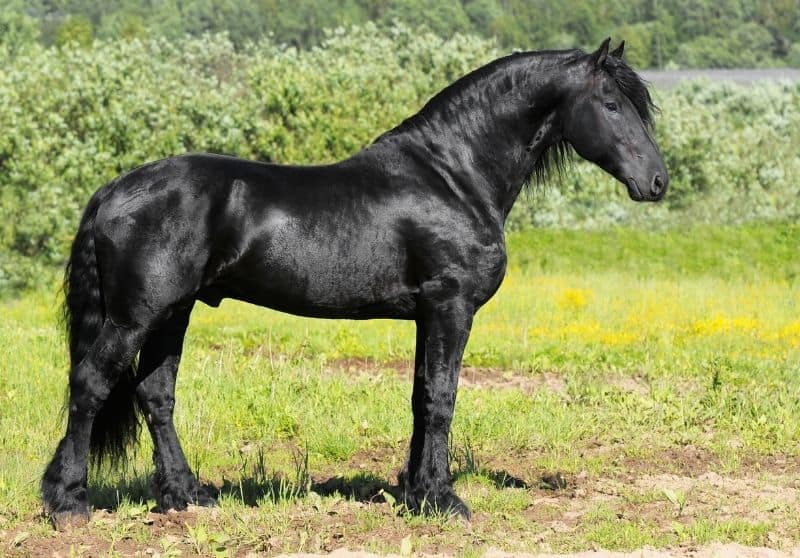 What is the Demeanor of Most Friesian Horses?

The demeanor of Friesian horses is just as popular as their looks. These horses are known to be even-tempered and trainable. They are often brave, which made them great warhorses at one point in history. Their appearances in many films and TV shows can attest to their teachability and ability to be handled by many different people.

How Tall do Friesian Horses Get?

Most Friesian horses mature around 16 hh, with some more drafty pedigrees standing as tall as 17 hh. This size along with their muscular bodies enabled them to be intimidating cavalry mounts and warhorses. They also had the strength and power to work the fields and pull wagons.

How Long do Friesian Horses Live?

Most Friesian horses have a shorter lifespan compared to the average horse. While the average horse lives about 30 years, Friesian horses have an average lifespan of 16-20 years. One reason for this may be their selective breeding, which has been protected for centuries. Selective breeding keeps other bloodlines from being introduced that could contribute to hardiness and longevity. While the meticulousness of the Friesian breeders over the years has produced a wonderfully unique horse, it has also brought along these downsides.

The History of the Friesian Horse

Friesian horses can be considered one of the oldest horse breeds in Europe, dating back as far as 500 BC. That being said, the breed wasn’t always what it is today. Through the beginning years, different bloodlines and breeding were added in to create the desirable horse we know today. Friesians were bred with an Arabian bloodline and Andalusians to give them the exaggerated movements that we know today.

Where Do Friesian Horses Originate From?

The Friesian horse originates from Friesland, a province in what we now know as Holland. Friesland was settled by an agricultural community in 500 BC, and horse breeding played a big role in the community. From there, Friesian horses would be produced and eventually become popular throughout Europe.

While the Friesian breed originated in Europe, where did the horse species originate? To learn more, visit my article Where Did Horses Originate? What the Evidence Says.

What Were Friesian Horses Originally Used For?

Originally, Friesian horses were used as workhorses. Their muscular build made them strong enough to pull wagons and plows. From there, they became popular cavalry mounts. Their intimidating size enabled them to easily carry an armored knight into battle while their agility allowed them to easily maneuver on the battlefield.

In the more recent centuries, these horses were chosen by the noble classes to become coach horses or riding horses. Their black coats, flowing manes and tails, and whimsical feathers exuded the wealth and nobility that royals wanted to communicate.

Their versatility as warhorses, riding horses, and carriage horses made them desirable across Europe, sending them to places like Spain and France. 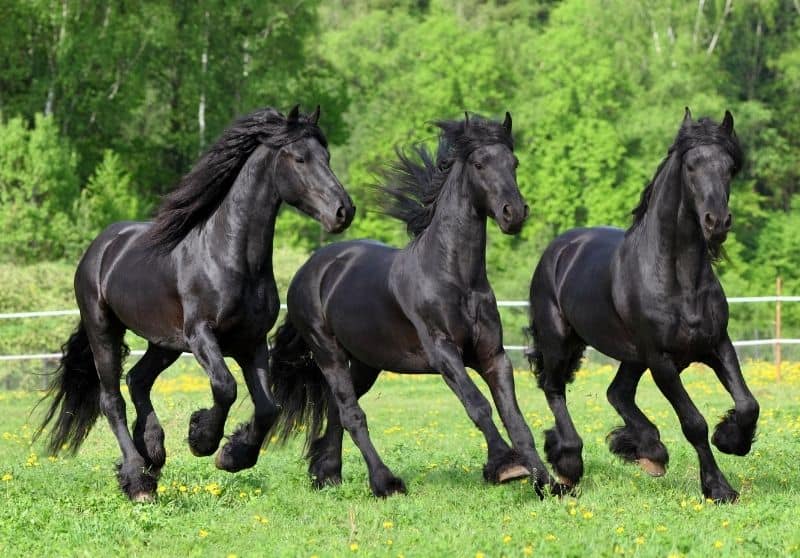 Friesian Horses in the Modern World

Today, Friesians still have the same shock-and-awe factor that they had on people centuries ago. Even non-horse people know what a Friesian horse is! While rarer than most common riding breeds, Friesians can be found throughout the modern world, used mainly as riding horses.

What Are Friesian Horses Used For Today?

In the modern equestrian disciplines, Friesian horses make popular dressage mounts. Their elegant look along with their favorable conformation and high-stepping action often makes for a horse with upper-level ability. You can find these horses competing in both classical and modern dressage.

These horses are still used to pull carriages today. Their strength and agility have made them popular in pacing races and carriage driving competitions.

Lastly, we’ve all seen Friesian horses in the movies. Their demeanor and looks make them a favorite for film training and stunts. You can spot these horses in historical dramas and in fantasy adventures! Next time you watch a movie, look for a Friesian!

How Much Do Friesian Horses Cost?

Friesian horses are very valuable and considered among the most expensive horse breeds in the world. On the low end, with no training or the ability to be ridden, you may be able to find a Friesian horse for around $10,000. For a well-trained horse, expect to pay anywhere from $40,000 – $60,000.

To learn more about some of the most expensive horse breeds, visit my article Top 15 Most Expensive Horse Breeds in the World.

What would you name your Friesian if you had one? To get some ideas, visit my article 200+ Black Horse Names (That You Haven’t Heard).