02 Nov Where Did Horses Originate? What The Evidence Says 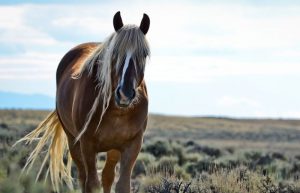 Where Did Horses Come From?

Horses are one of the most popular domesticated animals in the world and can be found in almost every country today. They are used for transportation, entertainment, companionship, and even meat and milk in some countries. While they can be found around the world now, where did horses originate from, all those years ago?

Where did horses originate? The earliest known ancestor of the modern horse is called Eohippus, and fossil evidence shows that this species originated in North America around 60 million years ago. Eohippus eventually evolved into Equus, which is what we know of as the horse of today. Though the horse roamed North America for millions of years, it became extinct to that continent some 11,000 years ago, only to be re-introduced later by the Spanish explorers and European settlers.

Did you know the first horse was about the size of a house cat? So, how did the horse become a half-ton ground-covering animal used in battle for thousands of years? Read on to learn more!

History Of The Horse

Though Eohippus is known as the oldest ancestor of the horse, you probably would not recognize it as such if you saw it today. After all, it was only around 13 inches tall, with an arched back and 3 or 4 toes on each foot. It had crowned teeth and most likely lived in the forest, eating brush and other plants.

45-50 million years ago Orohippus evolved from Eohippus – similar in appearance, though slightly larger and with the addition of a grinding tooth to enable it to feed on tougher grasses and plants.

Around 35-40 million years ago Epihippus came into the picture. Epihippus stood even taller than its predecessors, at around 4-5 hands high. Epihippus also had a large middle toe, which seems to be the first sign of today’s horse hoof.

17 million years ago Merychippus arrived on the scene – the tallest thus far at 8 hands high, with longer legs, a larger brain, a longer muzzle, and wide-set eyes. Merychippus is where we begin to see a frame more similar to that of our modern horse. There was a big evolutionary jump between Epihippus and Merychippus, though it still had its three toes.

Between 5-13 million years ago Dinohippus evolved from Merychippus and stood around 13 hands high. This is the last ancestor before our modern-day horse, and had a similar frame as of today’s horse, with just one large toe. Notably, this is where we see the stay mechanism – the locking knees which allow the horse to sleep while standing.

And here we have arrived at Equus, the modern horse that we are all familiar with. Equus evolved from Dinohippus 1-4 million years ago, and kept its ancestor’s height of about 13 hands high. From this horse, we have created all of the horse breeds we have today.

This evolution of the horse took place in North America, and there they remained until approximately 11,000 years ago.

When (And Why) Horses Left North America 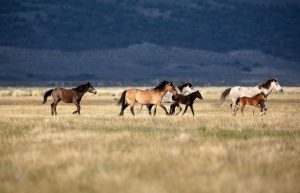 Fossil evidence tells us that horses began traveling between North America and Asia around 1 million years ago, and left North America for good around 11,000 years ago. You may be wondering how they managed this, as there is a sea between the two continents. If you have studied history and geography, you might know that thousands of years ago, the continents looked differently than they do today. At one point, it is believed that Asia and North America were connected by a stretch of land called the Bering Land Bridge, which ran from Alaska to Siberia. The Bering Land Bridge would have been a land of meadows and plains – in other words, an oasis for hungry horses.

It is believed that horses would migrate with the seasons between the two continents in search of food like many animals do today. The likeliest theory as to why horses stopped traveling back to North America is simply that they got stuck. After the Ice Age when the ice began to melt, it is believed that the Bering Land Bridge disappeared underwater as the sea level rose. It is likely that when this happened, these horses were in Asia, and were unable to return to North America.

To learn more about the history of the horse in North America, visit my article Are Horses Native To North America? What the Evidence Says.

The Horse Returns To Its Country Of Origin

The horses in North America today account for a third of the world’s horse population. We know that horses went extinct from North America 11,000 years ago, but are as popular as ever on the continent today – so when did they return to their country of origin?

Christopher Columbus was the first to bring horses back to North America in 1493. Before Columbus’s voyage, the Catholic king wrote a letter advising the explorer to take with him on his journey 20 “fighting horses” and 5 “dobladuras” from Grenada – “dobladuras” are believed to refer to “replacement horses” in case any of the original 20 did not survive. Christopher Columbus’s horses only reached the Virgin Islands, however, and never landed in the United States.

About 25 years after Columbus first brought horses to North America, the Spanish explorer Hernan Cortes brought 16 Iberian horses to what is now known as the United States – officially reintroducing them to their place of origin. Iberian horses are breeds that originated from the Iberian Peninsula and include the Andalusian and Lusitano horse breeds.

These horses were kept for work, transportation, and breeding. As they got loose or were abandoned, they continued to procreate and became feral. It is believed that the lineage of today’s feral mustangs found in the Western United States came from Cortes’s 16 Iberians.

When Were Horses First Domesticated?

Scientific evidence points to horses first being domesticated around 6,000 years ago, in the steppe lands north of the Black Sea. This area was full of grasslands and shared by Ukraine, Russia, and Kazakhstan. Whether or not horses were being domesticated in other areas at the same time is still a question, as it is difficult to determine with horse DNA.

Horses were first domesticated as livestock used for meat and milk, and are still used for these purposes around the world – in fact, it is really only English-speaking countries who are opposed to eating horse meat. Most countries in Asia, Europe, and even portions of Canada and Mexico eat horse meat regularly.

Because it is difficult to distinguish between horse DNA, it is likely impossible to determine whether horses were also domesticated in other countries around the same time as they were domesticated in Eurasia, though it is not unlikely, as horses had populated almost every continent by that point.

Where Horses Are Roaming Today

Almost every country has horses today. Only two countries have reported no horses at all – Rwanda, and St. Helena. In addition, Guam and Grenada have reported very low horse population numbers (only 20 and 30 respectively, according to the 2006 Global Horse Population report from the United Nations’ Food and Agriculture Organization). If you remember, Christopher Columbus brought horses to the Virgin Islands from Grenada – perhaps the population never recovered!

The United States dominates in horse ownership with approximately 9.5 million horses. Besides the US, the countries with the highest horse populations are China, Mexico, Brazil, Argentina, Colombia, Mongolia, Ethiopia, the Russian Federation, and Kazakhstan.

Within the large population of horses in the United States, Texas and California have the highest concentration.

There are no true “wild” horses – as all horses currently living in the wild originated from a domesticated horse. Therefore, all horses that live in the wild today are referred to as feral horses.

The iconic feral horses of North America are the mustangs. Mustangs can be found in most of the Western United States, and are managed by the Bureau of Land Management. To control the population, BLM regularly rounds up feral mustangs and auctions them off – many wonderful companions and riding horses were once feral mustangs.

Though mustangs are a large population and thus usually steal the show when it comes to feral horses, they are not the only feral horses in the United States. You can find Chincoteague ponies on the seaside in Maryland and Virginia, friendly Grayson Highlands ponies along the Appalachian Trail in Virginia, and Banker horses on the marshes of North Carolina.

You can also find herds of Koniks in Poland’s nature reserves. Konik horses have dorsal stripes and a dun coloring – giving them a primitive appearance.

You can find herds of feral horses in the English Moorland, Namibia, Japan, the French mountains and seaside, Wales, Romania, Georgia, and Portugal.

Horses Around The World

Though horses originated in the United States, their original migration patterns allowed for an early introduction into the rest of the world. Today, there are around 60 million horses in the world – and that number continues to grow every year.