24 Aug Are Horses Native To North America? What The Evidence Says 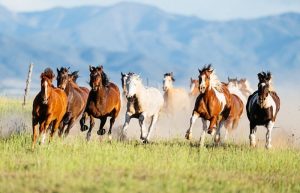 Did Horses Originate in North America?

Have you ever wondered where horses originated from? We know that there are wild mustangs in North America, but are horses native to the continent, and if so, how did they evolve into the horses that we know and love today?

Horses are native to North America, and there is fossil evidence that shows that Eohippus, which is the ancient ancestor of today’s modern horse, originated in North America 60 million years ago. Around 10,000 years ago, horses became extinct in North America but were brought back by European settlers and Spanish explorers.

Now that’s a lot of history! To learn more about the origins of horses in North America, keep reading!

The Origins of North America’s Horse

Eohippus, the scientific name for the first prehistoric horses in North America, went through several more transformations before leading to Equus, which is an ancient horse that resembles modern horses. Continue reading for more information about the fascinating evolution of the horse.

Eohippus, also called “Dawn Horse”, is the earliest ancestor of the modern horse and there is fossil evidence to suggest that Eohippus lived in North America 60 million years ago. Eohippus did not exactly resemble today’s horse, with its 3 – 4 functioning toes and arched back. Most notable was its size – standing only around 13 inches tall, it was about the size of a modern fox or house cat. With its crowned teeth, it most likely lived and foraged in the forest and had a diet of leaves and other forest plants.

From Eohippus came Orohippus, with fossils dating from 45 – 50 million years ago. Orohippus resembled Eohippus for the most part, but was slightly larger and had a grinding tooth, allowing it to feed on tougher plants.

And then there was Epihippus. Epihippus sported the arched back of its ancestors, but stood slightly taller, at 4.2 – 5 hands high. Epihippus fossils have been dated to 38 million years ago, and show a horse with more grinding teeth, which likely puts it in the grasslands and out of the forest. Epihippus also had a larger middle toe, which is the first sign of hoof development.

Merychippus arrived on the scene around seventeen million years ago, and has grown in size – Merychippus is believed to have been around 8 hands tall. Merychippus had a larger brain and was a smarter and more agile animal. It kept its three toes but otherwise resembled a horse, with its long legs, substantial body, long muzzle, and wide-set eyes. We’re getting close to our modern-day horse!

With a name that sounds more ancient than its predecessors, Dinohippus is believed to have evolved from Merychippus between thirteen and five million years ago. Dinohippus is significantly taller than Merychippus, standing at about 13 hands high. Dinohippus had a similar frame as the modern horse and had one large toe. They also had the stay mechanism, also known as the ability to lock their knees in place, which allowed the animal to sleep while standing up, as the modern horse does.

And here we have arrived at Equus, the horse of today. Equus evolved from Dinohippus around one to four million years ago and kept its predecessor’s height at around 13 hands high. Equus is the genus name of today’s modern horse and shares the characteristics and body type of today’s horses.

When Did Horses Leave North America?

Why Did Horses Leave North America?

Why the horses crossed into Asia from North America is another subject up for debate. The most respected theory suggests that horses migrated to find food due to climate change. This was during the time of the Ice Age, and it is theorized that horses moved further away to find viable sources of food as their diet became scarce in their native land.

How Did Horses Become Extinct in North America? 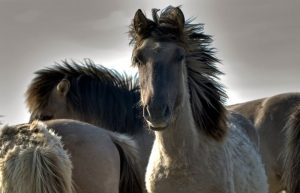 While Equus gradually spread to every continent except Antarctica and Australia, the horse became extinct in North America around 11,000 years ago. How might this have happened?

One theory is, again, climate change. During the Ice Age, it is believed that horses would travel to Asia in search of food, and would travel back to North America as the seasons changed. This behavior would be similar to the animals that migrate with the seasons today. When the ice began to melt and the climate changed once again, the Bering Land Bridge is believed to have disappeared underwater as the sea level rose. Some believe that horses simply could not travel back to their native land because of the flooded stretch of land, leaving them no choice but to strictly populate in Asia, Europe, Africa, and South America.

Another theory is that humans over-hunted horses. Archaeologists have discovered ancient butchering tools, dating back to approximately 7,000 years ago. On these butchering tools, they have found horse DNA. This theory is questionable, as there is no other fossil evidence of horses living in North America for thousands of years at this point. If there is no evidence of horses living in North America during this period of time, however, how would horse DNA have found itself on the blades of these butchering tools? There are unanswered questions to this theory and there could be evidence that we simply have not yet unearthed.

We may never know for sure how horses became extinct in North America, but most suggest it was likely due to migration after the Ice Age caused a lack of food in their native continent.

How and When Did Horses Return to North America?

North America’s horses account for a third of the world’s horse population. They are certainly populous in their native land now, so how and when did they return?

Technically, it was Christopher Columbus who brought back the first horses to North America in 1493, though the horses only reached the Virgin Islands. Around 25 years later, it is believed that Hernan Cortes, the Spanish explorer, brought 16 horses to the mainland, thus reintroducing them into their native homeland.

As these horses, thought to be of the Iberian breed, procreated, many were abandoned or got loose. These horses continued to procreate and eventually became what we now know as the feral mustangs of today.

Want to learn about some fascinating real-life stories of extraordinary horses? Check out my article Top 8 Horse Documentaries You Need to Watch.

As Europeans settled into North America, they brought with them various horse breeds from their homeland. They brought smaller riding horses, and also large draft horses that they used to plow fields and farmland. From here, North America had an influx of working horses and riding horses, allowing their humans to both farm, ranch, and travel before the invention of cars for transportation. At one point, horse racing became a popular sport as well, which introduced North Americans to Thoroughbreds.

There is still a healthy wild mustang population in North America. Because mustangs originated from Cortes’s sixteen original domesticated horses, they are not technically considered “wild”, but are more accurately “feral” horses. There are around 70,000 feral mustangs living in the Western United States today, roaming free among 27 million acres of public land.

The federal Bureau of Land Management oversees the mustang program in the United States, and they manage feral herds of mustangs in Colorado, Nevada, Arizona, California, Idaho, Montana, New Mexico, Oregon, Utah, and Wyoming. Mustang herds can also be found in Canada – in Alberta, British Columbia, and on Sable Island.

Some mustang herds are close to the original horse breed brought by Cortes, living in isolated areas of the western US. Other mustang herds are a mixed bag, having bred over time with various other breeds of domesticated horses. Mustangs can, and often are, broken and kept as pets as the population grows to an unsustainable level and must be managed.

Horses Are Back in North America And Here To Stay

By the early 1900s, there were around 20 million horses in North America, a vast improvement from their extinction 10,000 years prior. Today, there are around the same number of horses on the continent. While the number of horses has not grown substantially since the early 1900s, this is in large part due to the advances in technology. We no longer use horses for transportation, and for the most part, no longer use horses for farming. Most of the domesticated horses in North America today are pets and used for pleasure riding.

Want to learn more about horse history? Check out my article Why Horses Are Measured in Hands: Horse Hand Unit Guide.

P.S. Save This to Your “Horse” Board!