29 Apr What a Male Horse Is Called (And More Fun Facts!)

Understanding What to Call a Male Horse

If you have spent any amount of time in the world of horses, you have already been exposed to the many names that are used to identify a horse. Between technical names and nicknames, it can be nearly impossible to know the right term to use when describing a horse! However, it is important to educate yourself on the proper titles for horses at various ages. Doing so will allow you to more effectively communicate with other equestrians and care providers.

As you can see, the terminology used to describe a male horse is slightly more complicated than that of a female horse. In this post, we will walk you through everything you need to know to properly identify a male horse. With this information in your back pocket, you will be prepared to interact with other equestrians and horse owners as you navigate the world of horses.

What Do You Call a Male Horse?

A male horse that has reached adulthood is called either a stallion or a gelding, depending on its ability to reproduce. The terms stallion and gelding are reserved for male horses that are over the age of four. In some cases, a male horse is called a stud or a sire when referring to breeding.

Male horses between one year and four years of age are called colts. Before they reach a year old, all horses, both male and female, are called foals.

Most male horses are gelded before they reach one year old if the owner knows that they will not be used for breeding purposes. Gelding a male horse is the best way to eliminate the aggressive behaviors that often begin to appear once the horse reaches sexual maturity around 2 years of age.

In order to ensure that you are using the right terminology for the male horse, you will also need to determine its age. This is best done by examining the horse’s teeth. If the horse has a full set of permanent teeth, they are likely over the age of five.

Horses that are under the age of four will not have their full set of teeth, this fact alone confirms that they are a colt, whether they have been gelded or not. Of course, there are other, more accurate ways to determine the exact age of a horse. However, examining their teeth will give you the quickest results.

How to Tell the Difference Between a Stallion and a Gelding

Let’s take a closer look at the factors that define a stallion versus a gelding. These terms are often used interchangeably when describing an adult male horse. However, it is important to understand the correct terminology to ensure proper communication.

Any male horse over the age of four that is left intact and has the ability to reproduce is called a stallion. Stallions, while certainly necessary for the advancement of the equine population, often display aggressive behaviors that make them difficult to manage. For this reason, many horse owners choose to geld their male horses.

Gelding is a surgical procedure in which reproduction is made impossible through neutering. Most horses are gelded between the ages of 6 months to one year of age before they reach full sexual maturity. Not only does gelding eliminate some of the aggressive behaviors that the horse may otherwise display but it also eliminates unintentional breeding.

Any male horse over the age of four that has been neutered and is not able to reproduce is called a gelding. A male horse that is between the ages of one and four years of age is called a colt. Because gelding commonly occurs before four years of age, there is some crossover in terminology. However, if the horse is younger than four years, colt is the most accurate term to use, regardless of their ability to reproduce.

Other Names for Male Horses

In addition to the common terms used to describe a male horse, there are some other, more specific terms that you may come across. When in doubt, it is best to resort to calling a male horse a gelding or stallion as these are more broad terms.

What is a Colt?

As we mentioned previously, a colt is a male horse that is between the ages of one and four years old. Before they reach their first birthday, both male and female horses are called foals. After a horse reaches five years old, they are no longer a colt and, instead, should be called a stallion or gelding.

To learn more about baby horses, check out my article What a Baby Horse is Called ( And More Fun Facts!)

What is a Stud?

What is a Sire?

Should You Geld Your Male Horse? 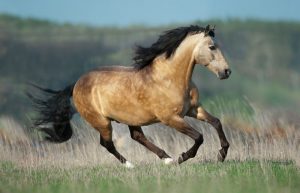 There is great debate amongst the equine community on whether or not you should geld your male horse. The general consensus is that if you are not planning on breeding your male horse, gelding is beneficial both for training and management.

Stallions are typically much more aggressive and unpredictable. They often present challenges when it comes to riding, training, and management. Additionally, you may need to house your stallion away from other horses to avoid aggressive behaviors or unplanned breeding.

Geldings are much more calm and easy to manage. In fact, the majority of horses used for riding are geldings due to these favorable qualities!

If you are planning on gelding your horse, it is best to do so at a young age. For this reason, many experts recommend gelding a male horse before its first birthday. Doing so will eliminate any unwanted aggression or the development of bad habits. Additionally, gelding your horse at a young age typically involves fewer complications and a quick recovery time.

There is no doubt about it, the thought of riding a stallion holds a certain allure for many equestrians. While most stallions are quite temperamental, they can be well-trained and become rideable. In ancient days, in fact, warriors would ride stallions into battle!

However, it is important to note that even the most well-behaved stallion is controlled by their hormones and can quickly become temperamental. For this reason, it takes an incredibly patient and advanced equestrian to properly manage a stallion.

If you are new to the world of horses, it is not wise to ride a stallion as this could result in injury to yourself, your horse, and others.

Most of the horses that are used strictly for riding purposes are geldings! With less testosterone due to castration, geldings are much more docile and even-tempered. Compared to female horses, geldings are also much more constant in mood and temperament. For this reason, geldings are often the best choice for a new horse owner or beginning rider!

It is important to note that not all geldings have the same behavior. The age at which the horse was gelded will have a great impact on its future temperament and demeanor. For the new rider, it is best to consider a gelding that was castrated early on in life to eliminate the potential of aggressive behaviors.

Regardless of the horse’s gender or reproductive abilities, you must take the time to get to know the horse you are riding. Just because a horse is gelded doesn’t mean you can assume that they will be calm and even-tempered. Likewise, just because a horse is a stallion does not mean that it will be aggressive and temperamental (although it’s highly likely).

We hope you are now equipped to use the correct terminology when referring to the male horses in your circle. Knowing the differences between colts, stallions, geldings, sires, and studs will allow you to communicate more effectively and progress in your equine journey.

Want to know more about female horses? Check out my article What a Female Horse is Called: Horse Genders 101.

P.S. Save this to your “Horse” board!