05 Dec What a Female Horse Is Called: Horse Genders 101 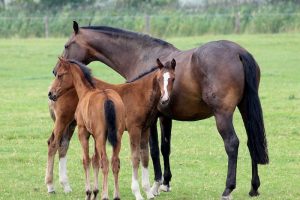 Especially if you are new to the horse world, it can be confusing to know how to refer to a horse. With so many terms used to describe both gender and age, it can be a complex topic to master. However, referring to your horse by the proper title will allow you to not only communicate more effectively but provide more appropriate care and training.

In this post, we will share everything you need to know to properly identify horses based on their age and gender. Armed with this information, you will be ready to confidently interact with other horse owners and equestrians.

Everything You Need to Know About Horse Genders

Is there anything more embarrassing than using terminology that you think you understand only to be corrected by another horse lover? While this is a necessary part of the learning process, educating yourself on popular topics can help minimize this type of occurrence. Keep reading to learn everything you need to know about horse genders.

What Do You Call a Female Horse?

An adult female horse is called a mare. Any female horse over the age of four falls into this category. While there are other terms used to describe a female horse during different times such as a dam or broodmare, the term mare can be used in any situation.

The primary way to quickly identify the gender of a horse is to take a look at their underside. Mares will have an udder; however, depending on age, this may be more or less prominent. Additionally, if you lift the tail of a female horse, you will find two openings: the anus and the vulva.

A female horse younger than four years old will likely not have their full set of permanent teeth. If this is the case, it is safe to refer to the horse as a filly.

What Is The Difference Between a Mare and a Filly?

The only difference between a mare and a filly is age. Both terms are used to describe a female horse. When a mare gives birth to a female foal, they are called a filly. This term can be used to accurately describe the young female horse until they reach four years of age. At this point, they earn the title of mare.

What Do You Call a Male Horse?

An adult male horse is called either a stallion or a gelding, depending on their ability to reproduce. Both stallion and gelding are terms used to describe a male horse over the age of four. You may also hear an adult male horse called a stud or sire when referring to breeding.

To determine the age of a male horse, you should use the same method mentioned previously. Examine the horse’s teeth, looking for a full set of permanent teeth. Horses that are under the age of 5 will not have their permanent teeth. If the male horse is under the age of four they will not yet possess a full set of teeth, confirming that they are still a colt. It can be helpful to know how horses develop as they age; check out our article Horse Growth Guide: When Do Horses Stop Growing?

What Is The Difference Between a Stallion and a Gelding?

These two terms are often used incorrectly to describe adult male horses. A male horse over the age of four who can reproduce is called a stallion. Many horse owners choose to eliminate the potential of unintentional breeding through a process called gelding. Gelding is a surgical procedure in which the horse is neutered, making reproduction impossible. Male horses who no longer possess the ability to reproduce are called geldings. Young male horses under the age of four are called colts.

What Are Baby Horses Called?

Perhaps the greatest area for confusion in horse gender terminology concerns baby horses. Many people refer to any baby horse as a filly or a colt, this is simply not accurate. The generic term for a baby horse is a foal. A newborn horse may be called a foal regardless of their gender. The generic term of foal is often used until the young horse reaches one year of age.

You may also hear a young horse referred to by other names including yearling and weanling, titles that are used to more accurately describe their stage of development. To know more about foals, check out our article What a Baby Horse is Called (and More Fun Facts!)

Other Names for Horses 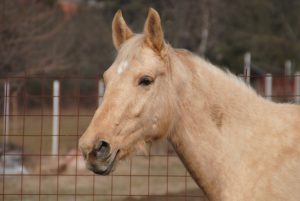 No matter how long you have been involved in the world of horses, you likely realize how many terms are used to describe horses in various situations. Here are a few of the most common terms used to describe a horse:

There are, of course, personality and behavioral characteristics that are possessed by both horse genders. Because of this, many equestrians and horse lovers have a preference as to the easiest horse gender for beginning riders. Hormones play a large role in the behavior of a horse and it is important to consider this as you learn to ride or purchase your first horse.

Stallions, or male horses that can reproduce, can be temperamental and, in some cases, dangerous. Even the most well-trained stallion can have a mind of his own causing frustration and chaos. If you are new to the equestrian world or just learning to ride, it is not recommended that you start with a stallion. While stallions certainly have favorable characteristics, they perform better with an experienced rider.

In many cases, first-time horse owners or riders believe that a mare would be the best fit. However, mares experience heat cycles that can cause them to become moody or temperamental. This can make it difficult to train or ride, especially for a new rider. While not every mare displays seasonal moodiness, it is something to take into consideration as you are selecting your first horse.

For most new horse owners or riders, a gelding is an excellent choice. Without the ability to reproduce, geldings often have a much more docile demeanor than stallions. Additionally, geldings do not experience the moodiness or mares, making them a more constant companion.

With any horse, you must prioritize proper care and training to make the most of your experience. Just like any horse can display unfavorable characteristics, they can also be taught proper behaviors through consistent training.

Armed with this newfound knowledge of horse genders and terminology, I hope you can interact within your equine circles with confidence. By understanding the difference between different terms, you can continue your education on how to care for and train your horse properly.

Need help finding the right horse? Check out these tips in our article Choosing the Right Horse: 10 Expert Tips.

P.S. Save this to your “Horse Care” board!