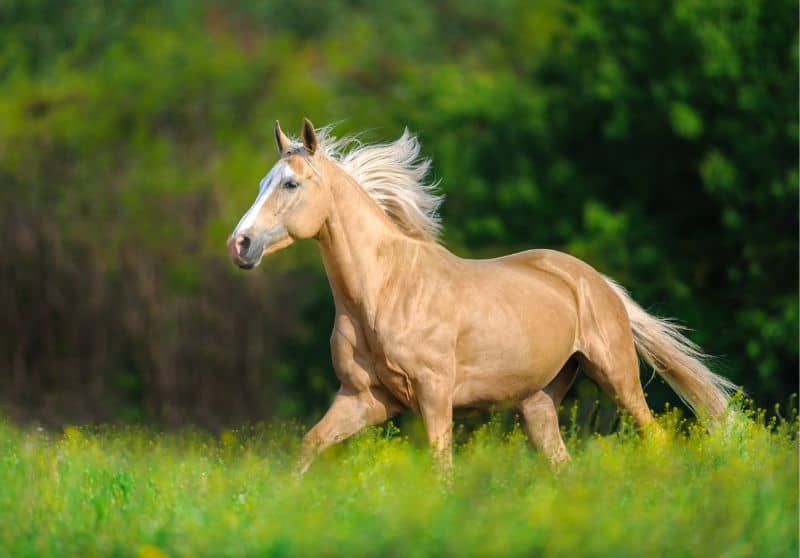 All You Need to Know About Palomino Horses

When it comes to horse coloring, anywhere you look you’re bound to find a bay, a grey, a chestnut, or even a black horse. One horse color that is less common is the golden shine of a palomino.

The palomino horse coloring is most often described as “yellow.” Palomino horses have a golden creamy coat that is accented by a flaxen mane and tail and potentially other white markings on the face and legs. While this coloring isn’t found in every horse breed, it is more popular in Quarter Horses, Morgans, Ahkal Tekes, Missouri Foxtrotters, and more.

While there may not be an abundance of palominos like there are bays, the good news is that there are still plenty of palomino horses out there. If you’re interested in owning a palomino horse, this article will walk you through everything you need to know!

Just because a horse may look like a palomino doesn’t necessarily mean they are one. According to the Palomino Horse Breeders Association, there are some specific features a horse must have in order to be considered a true palomino horse.

If you wanted to breed horses to produce a palomino horse, your best chance would be to breed a chestnut horse that has the chestnut gene to a cremello horse, which carries the cream dilution gene.

The most pertinent visual characteristic of a palomino horse is its golden yellow coat. While there are different variations, from a soft creamy yellow to a dark brassy coat, any true palomino will have the chestnut and cream dilution gene.

The coat colors that are most often mistaken for a palomino include light chestnuts, dun, champagne, and cremello. A chestnut horse can sometimes have a flaxen mane and tail, giving off the illusion of a palomino. This is most often seen in Belgians, Haflingers, and walking horses. While dun and palomino can be close in color, a dun horse will always have a dark dorsal stripe down the middle of its back; if a palomino has a dorsal stripe, then it’s not actually a palomino.

Champagne and cremello horses can look almost identical to a palomino horse, the only difference is that these horses usually have multiple cream dilution genes rather than just one against a chestnut gene.

Another defining factor of a palomino horse is its dark skin. While its yellow coat may be on the lighter side, underneath the coat will be dark skin, ranging from grey to black in color. Palominos can have white markings on their face and legs that have pink skin underneath, but under their yellow coat will always be dark skin.

This is another differentiation between palominos and champagne or cremello horses. These horses will have light pink skin under their coat thanks to their multiple dilution genes.

A palomino horse will always have a flaxen mane and tail, also known as a white mane or tail. Under registration rules, the mane and tail of a palomino have to be at least 75% white, with 25% allowed to be black, grey, or brown.

If you have a horse that you think is a palomino but it has a majority of dark mane and tail, chances are the horse is actually a buckskin, dun, or champagne.

While the shading of a palomino horse can range greatly from a lighter to darker palomino, there are four distinct color variations that palominos come in. 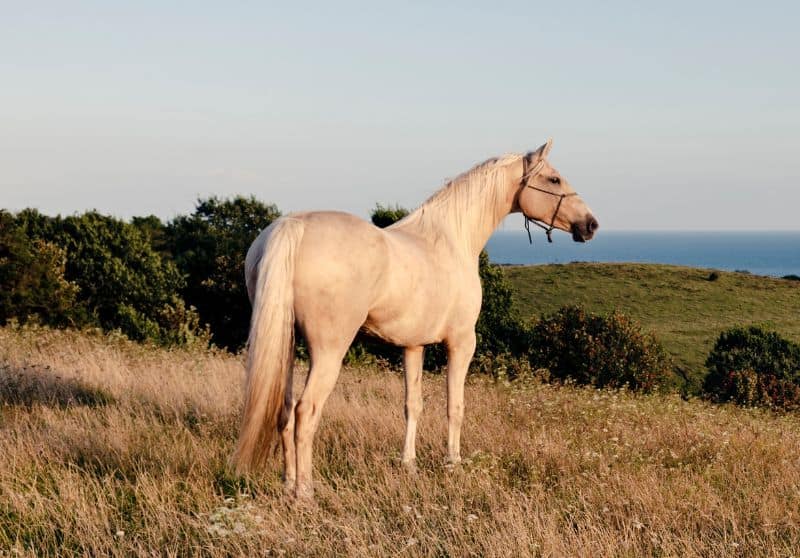 This shade is considered the lightest palomino color. At first glance, a pearl palomino could easily be mistaken for a white horse. With a closer look, you should be able to notice the soft cream coat with a yellow hue. 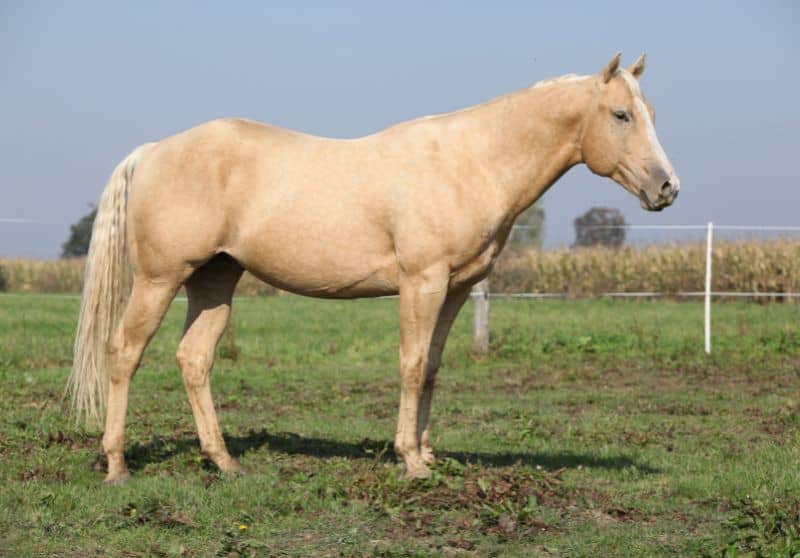 While still a softer creamy color, a light palomino will have a more noticeable yellow coat. This coloring can be compared to a more buttery yellow or the color of a buttercup. 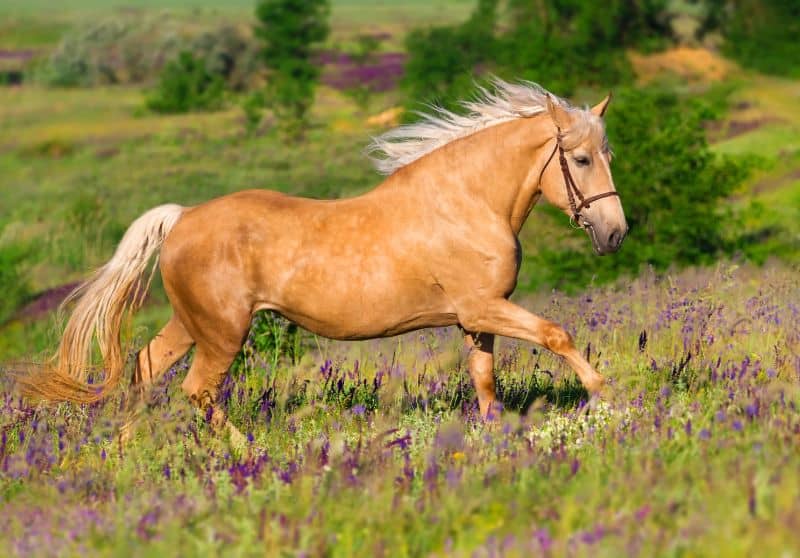 At this shade, the palomino coat starts to become darker. The closest color comparison to a golden palomino is well…gold. These horses will have a rich shiny coat that reflects like gold. 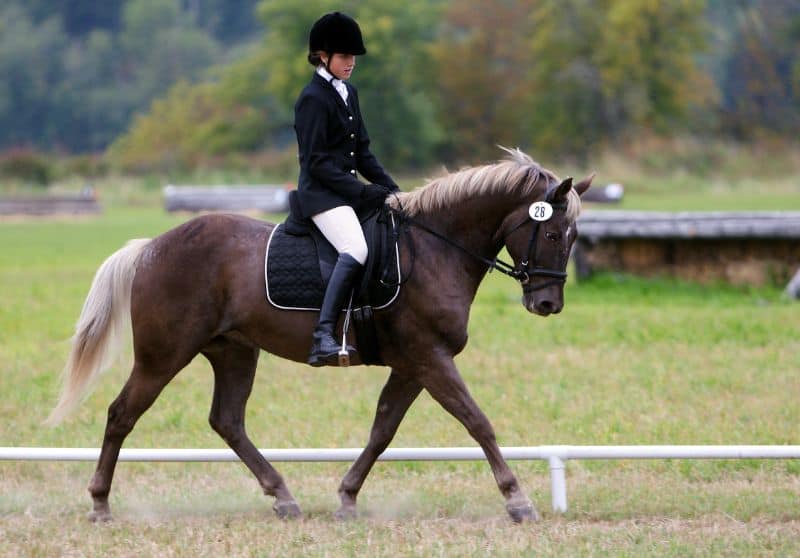 If it weren’t for the flaxen mane and tail, it would be difficult to differentiate a chocolate palomino from a bay or a liver chestnut. These horses have a dark rich coat that looks like chocolate.

The Haflinger is one breed whose members are often mistaken as palominos. While they may look palomino, all Haflingers are, in fact, chestnut. They do not carry the cream dilution gene, which makes them fully chestnut.

How Much Do Palomino Horses Cost?

The cost of a palomino horse can range greatly, largely depending on the breed and training of the individual horse. The palomino color is just one factor that can play into the overall price of a horse. There are people who will pay more to get a horse of a specific color.

Here’s a look at the average prices of certain palomino horse breeds:

Quarter Horses are the most populous horse breed in America! That being said, you can usually find quarter horses at more reasonable prices compared to more rare breeds. These horses are versatile with calm tendencies. Certain bloodlines and pedigrees can see these horses selling for over $50,000.

If you’re looking for a comfortable ride built for endurance and trail riding, a Tennessee Walking Horse may be the horse for you. These horses are gaited, meaning that they always leave one foot on the ground as they move; this creates a very smooth and comfortable movement. They are also sure-footed and hardy, great for covering miles of difficult terrain.

Connemaras are horses that are best known for their jumping abilities. While these small horses have big talents, they also make popular lesson mounts due to their small size. While well-trained Conemmaras can be expensive, you can also find them at decent prices depending on where you look. Coming from Ireland, this is a populous and popular breed throughout the United Kingdom, being more rare and desirable in America.

These rare horses are among some of the most expensive horses in the world. Best known for the metallic glimmering coat and slender bodies with long necks, these horses excel in endurance and eventing. Originating from the Middle East, these horses are designed to thrive in desert environments with little water.

Where Did Palomino Horses Originate From?

While the palomino horse breeds originate from many different places, there is a theory on where the palomino color comes from. It is most likely that the palomino color originated in horses living in desert or arid climates. The yellow coat color would enable the horse to blend into its desert environment while also protecting the horse from the hot rays of the sun.

This theory is most evident in the Akhal Teke horse breed. These horses come from the deserts of the Middle East, surviving for days in the hot sun. Because of this climate, these horses have evolved with light-colored metallic coats to protect them from the heat.

Although there are fewer palomino horses in the world compared to bays, greys, or chestnut horses, you can still find these horses throughout world history. Here are some interesting historical facts about palomino horses:

William the Conqueror and Palominos

Queen Isabella was the ruler of Spain in the 1500s. It is a known fact that she was obsessed with golden-colored horses, designating 100 of these horses to be kept for royalty and nobility. Due to her passion for these horses, they successfully made it to America through her financing of expeditions to the New World.

Possibly one of the most popular horses in the history of entertainment was Mister Ed. He was a big palomino Saddlebred Cross known for his ability to talk. Apparently, filmmakers put peanut butter on Mister Ed’s bottom lip to make him move his mouth as if he was talking. Later in the studio, they would dub over him. Even 50 years after his passing, even non-horse people know who Mister Ed is!

Another famous palomino in media was Roy Rogers’ horse, Trigger. Roy and Trigger became popular on television during the 1940s and the 1950s. Trigger was a Thoroughbred Cross stallion that knew quite a few impressive tricks. He is still known as one of the smartest horses of all time.