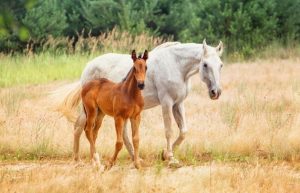 What You Need to Know About Breeding a Horse

Horses are not the most efficient breeders, with only 50-60% of breedings resulting in foals. Because of this, many of us have heard about artificial insemination in horses. But you may have wondered how these large mammals mate with one another naturally. How do horses mate, if left to procreate naturally?

How do horses mate? Horses mate like many other mammals mate – through courtship, followed by the stallion (male horse) mounting a receptive mare (female horse). Mares will show signs of being in heat during her most fertile days, which are 5-7 days during the beginning of her cycle. This is the ideal time for horses to mate to produce a foal.

While it may seem like a simple and natural process if you’re planning to breed your horse, there are some things to consider to increase the chances of a successful gestation. Read on to learn more about the horse’s breeding cycle, sexual maturity, and mating behaviors.

How Horses Mate: The Receptive Mare

Like most male mammals, stallions are willing and ready to mate throughout the year. This means that the timing really depends on the female. So how does a mare show a stallion that she is ready to mate?

When a mare is fertile and in heat, she will show physical signs such as discharge and a swollen vulva. When a stallion is around, she may urinate in front of him (releasing pheromones that will tell him she is ready to mate) and might position herself in a straddling pose. When she has the stallion’s attention, she will lift her tail to show him that she is ready. 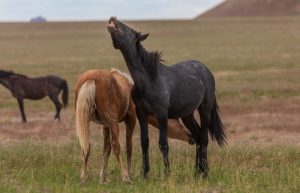 Though fertile mares are typically receptive to a stallion’s advances, that does not mean the stallion doesn’t have to put in any effort. Stallions will sense a fertile mare through the signs that she will give him. To test whether or not a mare is receptive, a stallion may sniff the mares or even bump against them to test their readiness.

Once a stallion has discovered a receptive mare, he will elicit the Flehmen Response – in other words, he will lift his head back, with his nose in the air, and may curl his upper lip. He may prance around, and show off for the mare. He will then often do a sort of dance, lifting his hooves high off of the ground and twirling in tight circles.

After this display, he will get close to her and may bite or nuzzle her. If the mare does not rebuke him, he will then start sniffing her backside, legs, and tail. At this point, the mare will likely have lifted her tail to him, and he will then mount her. The act of courtship is usually a longer display than the mating act itself, which is only a couple of minutes long.

Want to learn more about female horses? Visit my article What a Female Horse is Called: Horse Genders 101.

How Horses Mate: The Aftermath

If you are supervising a breeding for the first time, do not be alarmed if your mare falls onto her side after the mating act. It is very common for the mare to fall over after mating, and happens more frequently with first-timers – though many mares will fall over every time after mating.

There are many theories as to why a mare may fall over and need some time to recover after mating:

Hormones may come into play here. Hormones are fluctuating throughout the estrus cycle and will reach a peak during fertility. A mare’s hormones may also cause her to lay down after mating for the best chance at conceiving.

While the weight that the stallion does place on a mare does not typically cause any harm, it can certainly throw her off balance. When he dismounts, she may find herself losing balance and will lie down to recover.

The most likely reason that mares lie down after mating is because they are overwhelmed and need to rest to bring their heart rate back down to normal levels. Stallions can be aggressive and hyperactive when courting and mating, and horses are socially sensitive creatures. When a hormonal mare is faced with an excited stallion, her body and mind may become stressed, leading to the need for a brief rest.

When Do Horses Mate?

Most horses have a seasonal breeding cycle, going into heat for the first time of the season in early Spring and ending in late Summer. Mares go into heat every 21 days during this breeding season and are fertile and receptive to mating during 5-7 days out of their cycles. Mares begin their breeding season gradually, with the first cycle of the year often being irregular and unreliable for breeding purposes. Around the age of 15, a mare’s cycle will become less frequent until they stop completely, most commonly between the ages of 15 and 20.

Why Are Horses Seasonal Breeders?

The average gestation period for a mare’s pregnancy is 11 months. Late Spring and Summer are the ideal seasons to give birth, as these warmer, temperate months help to ensure the greatest chance of survival for young foals. For this reason, mares usually stop going into heat in late Summer or early Fall so that they do not fall pregnant in the late months of the year, forcing them to raise a young foal in the harsher Winter season. But what if you would like a Winter foal, and you have the mild climate and/or resources to ensure proper care and warmth for a baby?

Many breeders who can ensure proper foal care in the Winter choose to encourage an extended (or early) breeding season among their mares. Daylight, or lack thereof, can affect a horse’s hormones and estrus cycles. It is the lack of daylight that prevents many mammals from going into heat during the winter months – and is also the reason that chickens and other fowl stop laying eggs in the colder seasons as well.

Just as putting a light in your chicken coop can encourage Winter egg production, exposing your mares to artificial light during the Winter can trick their bodies into going into heat. How much light do mares need? If you would like to encourage Winter fertility or a reliable early Spring cycle, you will want to aim for 14 – 16 hours of artificial daylight per day. Providing this light is easier if your horse is stalled at night, and can be accomplished by adding a light to your mare’s stall in the evening hours.

When Are Horses Sexually Mature?

Sexual maturity is a term applied to an animal that has started puberty. A mare usually goes into her first heat at around 12 – 15 months of age. This early age of puberty onset should not be interpreted as a filly ready to mate, however. The age of 2 is the absolute earliest that fillies can be bred safely, and many breeders consider this age much too young for the health and proper growth of the filly.

Horses are not fully physically mature until around the age of 4 to 6 depending on the breed, and there is still a lot of growth and joint development happening in a 2-year-old filly. Many believe that breeding a filly at 2 years of age will stunt her growth and lead to abnormal development. We must keep in mind, however, that the gestation period for a horse is 11 months, and so a filly bred at 25 months will not actually give birth until she is 3 years old. Most of the physical toll that pregnancy takes on a mare is occurring in the last 1-2 months of gestation, and so the first 9-10 months are relatively easy on her body – in terms of joint and bone development at least. Still, breeding a horse under the age of 4 should be done with great caution, and only after getting the all-clear from your veterinarian.

In addition to the physical demands of pregnancy, most breeders agree that a horse needs to be mentally mature enough to make a good mother to her foal. A horse under 4 or 5 years old may not have the mental capacity to respond to her foal appropriately, and this could be detrimental to the development of the foal after birth. Think about the mental preparedness that a 15-year-old human mother may have in contrast to a 30-year-old human mother. Both women would have been fertile and able to conceive, but the younger mother may have had a more challenging time taking on the demands of motherhood.

While the decision on when to breed your mare is highly individual and will be based on a number of factors, most agree that the prime broodmare age is between 5 and 10. Of course, if you would like to breed your mare more than once you will want to start on the earlier side of that range.

Is Your Mare Ready To Breed?

If you want to breed your mare, it is a good idea to have a veterinarian give her a thorough exam to ensure she is of optimal health to carry a healthy pregnancy. It is important not to breed your mare too young, and it is important to give her extra care (and calories) during her pregnancy. Though the 11-month gestation may seem long, it will be worth the wait when she gives birth to her foal.

Once your horse has been successfully bred, you’ll have a baby to think about! Working with baby horses is a whole different ball game compared to working with their adult counterparts. To learn how you can start working with your foal, check out my article How to Train a Young Horse: Everything You Need to Know.