While all horses are beautiful and unique in their own way, there is something especially fascinating about big horses. Some of the biggest horse breeds seem larger than life itself. Although large horses are used in many areas of the equine community today, most of them were originally bred as workhorses. Learning more about the incredible history of these gentle giants gives us a deeper appreciation for their massive size and strength.

Of course, there are horses within each of these breeds that may be shorter than horses of other breeds, and vice versa. Historically, however, these eight are among the largest horse breeds known to man.

While many large horse breeds deserve a place on this list, we have chosen the eight breeds that are historically recognized as the largest. Let’s take a closer look at the record-breaking size and strength of these beautiful beasts. 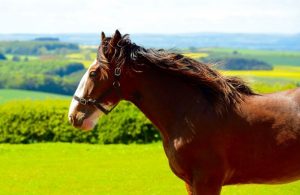 Perhaps one of the first horse breeds that come to mind when thinking of large horses is the Clydesdale. Clydesdales have served many purposes throughout the years including agriculture, war, parading, hauling, showing, driving, riding, and pulling carriages. However, they are most famously known as the Budweiser parade horse.

Clydesdales are between 1,600 to 2,400 pounds when fully matured and average a height of 16-18 hands high (or 64-72 inches tall). A gentle yet energetic breed, Clydesdales are likely the most well-known breed of draft horse, both inside and outside equestrian circles. Clydesdales are favored for their easygoing nature and high trainability.

Some of the trademark characteristics of this breed include a long arched neck, silky feathering around their legs, and a broad forehead. This large, beautiful creature has an average life expectancy of 20-25 years.

One of the lesser-known facts about the Clydesdale breed is that they make great trail horses due to their agility, calm demeanor, and strength. 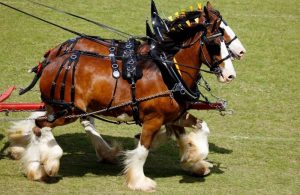 Originating in Great Britain, the Shire horse is known as the tallest horse breed known to man. This rare horse breed weighs between 1,800 and 2,400 pounds and are typically 16 hands to 18 hands high (or 64-72 inches tall). With a tall, muscular build, the Shire Horse has feathering on the legs, similar to that of a Clydesdale.

The Shire Horse has an interesting history, most notably used to pull large carts of ale between breweries and public houses. Shire Horses have served many other purposes including farm horses, pulling horses, and even riding. Even in modern times, Shire Horses are used on small farms as an eco-friendly alternative to tractors.

Shire Horses are historically one of the strongest horse breeds. In the early 1920s, a pair of Shires is reported to have pulled a load that weighed over 45 tons! Similar to the Clydesdale, Shire Horses are calm and docile, great for equestrians of all ages and levels of experience. These gentle giants have an average life expectancy of between 25 and 30 years. 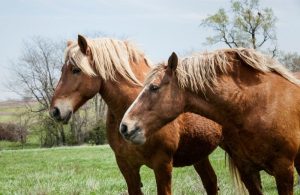 Belgian Draft Horses weigh, on average, between 1,800 and 2,200 pounds. They are typically between 15 hands to 18 hands high (or 60-72 inches tall). Although they have the feathered legs of Clydesdales and Shire Horses, Belgian Draft Horses have a short, muscular neck as opposed to a long, elegant neck.

According to Guinness World Records, the tallest living horse in the world is a Belgian Draft Horse. Standing at 20hh, 2 ¾ inches tall, Big Jake has held this record since 2010. 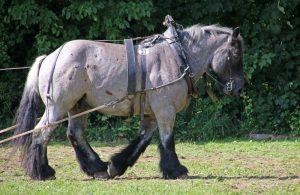 Dutch Draft horses have been known for their usefulness in farm work where they excel at pulling incredibly heavy loads. Additionally, unlike other large animal breeds, the Dutch Draft horse has a relatively long working life, a benefit to farmers. Although Dutch Drafts are incredibly intelligent, they have a rather calm demeanor, making them well-suited for framing tasks.

Dutch Draft horses typically weigh between 1,550 to 1,800 pounds and stand approximately 15 hands to 17 hands high (or 60-68 inches tall.) One of the most notable physical characteristics of Dutch Draft horses is the combination of stocky shoulders with the iconic feathered legs inherited from their Belgian ancestors. 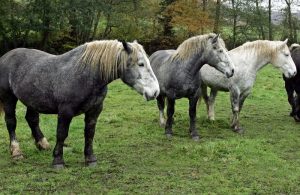 Originally used as a warhorse, the Percheron continues to appear in many equestrian circles. Today, Percherons are used as draft horses, they also excel in pulling circuits as one of the strongest horse breeds alive.

Percherons have a muscular build with an arched neck. Their calm, docile demeanor makes them well-suited for any equestrian, as long as the rider is not intimidated by their size. Most Percherons weigh between 1,800 to 2,600 pounds and stand between 15 hands to 19 hands high (or 60-76 inches tall).

In recent years, Percherons have been cross-bred with thoroughbreds or other similar breeds, resulting in a sport riding horse. The average life expectancy of a Percheron is between 25 and 30 years, similar to other large breeds on this list.

The Suffolk Punch Horse, sometimes called the Suffolk Sorrel, is actually considered an endangered horse breed in much of England. One of the oldest breeds on this list, the Suffolk Punch gets its name from both the region in which it originates as well as it’s “punchy” appearance.

This strong, energetic breed was used widely in agriculture but is more recently used in forestry, advertising, and draught work. In recent years, there has been a renewed interest in this fascinating breed, leading to a rise in population numbers once again.

The Suffolk Punch Horse typically weighs between 1,950 and 2,200 pounds and stands an average of 16 hands to 18 hands high. 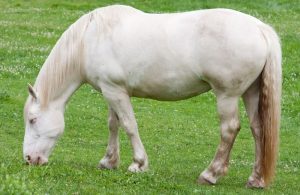 As the only horse breed originating in America that still exists today, the American Cream Draft Horse deserves its rightful place on this list. This incredibly rare horse breed was introduced in the early 20th century, barely surviving the Great Depression.

Originally used as a farm horse, primarily in Iowa, the American Cream Draft population was critically threatened by the decrease in horse use for farming in the mid-20th century. American Cream Draft Horses are known for their sloping shoulders and wide chests. Much like other draft horses, American Cream Drafts have a calm demeanor and are well-suited for horse owners of any level of expertise. 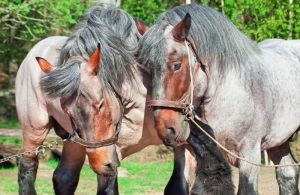 Brabant horses are actually considered Belgian Drafts; however, Brabants were bred to be stockier and more muscular than the American Belgian we are most familiar with. For this reason, they can also be known as the Belgian Heavy Draft Horse. The selective breeding of Brabants has taken place mostly in Europe to develop a strong plow horse that can be used mainly for logging and farming.

Brabants usually stand between 16 – 17 hands high and weigh up to 3,000 pounds. Sadly, their large size has led these horses to be used largely for their meat. The Brabant horse is considered one of the heaviest horse breeds in the world, and can easily intimidate you with its size and muscle.

The Biggest Horses to Ever Live

It is always fascinating to learn more about the many record-breaking horses that have graced this planet. From height to weight, the horses on this list deserve recognition as not only some of the biggest horse breeds but also the largest horses within those breeds!

Ask any equestrian or horse lover and they will be quick to name Sampson as the biggest horse to ever live. A Shire Horse originating in Bedfordshire, Sampson was both the tallest and the heaviest horse known to man. Sampson stood at an impressive 21.26 hands high (or 86.5 inches tall) and weighed over 3,360 pounds at his heaviest.

Born in 1846, Sampson maintains the title of the biggest horse to ever live, although a few have come close to his record. At four years of age, Sampson was renamed Mammoth, a name that he held until his eventual passing.

While he is not the biggest horse to ever live, Big Jake is the tallest living horse. A Belgian Draft Horse, Big Jake stands at 20 hands high (or 80 inches tall. According to his current owner who resides at Smokey Hollow Farm in Wisconsin, USA, Big Jake is the epitome of a gentle giant.

Big Jake is rumored to eat twice as much as an average-sized Belgian Draft Horse. And, as you can imagine, requires a great amount of care and attention to ensure that he is not injured due to his incredible size.

While we know little about him, King LeGear deserves a place on the list of the biggest horses in history. A Clydesdale Draft Horse, King LeGear stood at an impressive 20 ½ hands high and weighed 2,950 pounds when weighed at the age of 7.

Before Big Jake, Guinness World Records recognized Goliath as the tallest living horse. His reign, however, was short-lived. A beautiful Percheron, Goliath was 19.1 hands high and weighed 2,500 pounds.

Many equestrians have heard of the famous horse, King LeGear. But have you heard of Dr. LeGear? Originating on the same farm as King LeGear, Dr. LeGear was a Percheron who stood at 21 hands high. In addition to his incredible height, Dr. LeGear weighed 2,995 pounds, making him one of the heaviest horses in history as well.

Both King LeGear and Dr. LeGear were owned by Dr. L.D. LeGear, a Missouri-based businessman who owned a veterinary company in the 20th century.

Another large horse of old, Morocco, a Percheron-Arabian Draft Horse stood at 21 hands and weighed more than 3,000 pounds. This large horse, owned by CH Gambol, was displayed at the St. Louis World Fair and later at Coney Island.

Taking the Guinness World Record from his predecessor, Goliath, Radar held the title of Tallest Living Horse from 2006-2009. Radar, a Belgian Draft Horse, stood at 19 hands 3 ½ inches high and weighed over 2,300 pounds.

Finishing our list of the biggest horses in history, we have Remington, a Clydesdale. Remington held the Guinness World Record for Tallest Living Horse from 2009-2010 when Big Jake took the title. Remington stood at about 20 hands high and weighed approximately 2,500 pounds.

As an equestrian, I am sure you are as fascinated as I am by these gentle giants. By learning more about these large horse breeds, we can develop a greater appreciation for the role they play in the equine community.

Once question you might be asking is how do you measure a horse to determine how tall they are? You can find out in my article here on measuring horse height.

We have many articles about different horse breeds; you can learn more by reading the articles below!

P.S. Save this article to your “Horses” article!