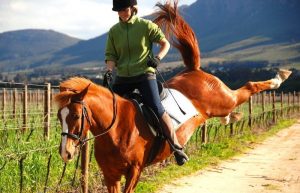 How to Tell When Your Horse is Being Disrespectful

When it comes to working with 1,000-lb animals, it’s important to have boundaries. Certain behaviors demonstrated by horses can be potentially dangerous for their handlers. Horses aren’t born understanding the boundaries and personal space rules humans have; they must be taught. To teach your horse about boundaries, you must first be able to recognize when they are displaying behavior that needs to be addressed.

What are signs that your horse is being disrespectful? I find that the displays of disrespect from a horse often fall into three categories:

In this article, I’ll share common behaviors that fall into all three of these categories. As we get started, it’s important to remember that in most cases, these issues are often due to a lack of training. Most horses simply have to be taught and reminded every once in and while that you have boundaries. A horse that hasn’t been around humans isn’t going to understand how to properly handle themselves around them.

**Another Thing to Note.** Before you deem a behavior from your horse as disrespectful, it’s always important to rule out any health issues first. Some of the behaviors I will list today can also be displayed due to pain or other health issues a horse may be dealing with. The last thing you want to do is correct a horse that is simply trying to tell you that they’re in pain.

Ignoring or fighting pressure largely means the horse fighting against the aids you apply. We naturally communicate with our horses through pressure; when you go to steer them, you’ll use pressure from your reins and legs. When you move them over as you groom, you apply pressure to their side so they’ll step over. When you need to lead them, you may pull the lead rope in a certain direction. In order to do all this, horses must be taught how to properly respond to pressure when it is applied.

Horses may naturally fight against pressure as it can restrain their flight abilities. For example, a horse that has never been tied before may find being tied a bit nerve-wracking. Horses are flight animals, and it is their natural instinct to run away from anything that they deem a threat. When they are tied, suddenly their movement is restricted and they won’t be able to flee if they needed to.

Understanding a horse’s natural instinct and how it relates to their behaviors can make you have more empathy and patience with them in training. I always try to think about why my horse is responding a certain way before I start to correct them.

Teaching a horse to respond to pressure is simple and easy. What’s more important is that YOU respond correctly when the horse has responded correctly. The concept of teaching your horse to give to pressure instead of fight it is known as pressure and release. This means you apply pressure to ask the horse to do something; when the horse responds correctly, you release the pressure. The release of pressure is how the horse learns the correct response.

Let’s apply this to one of our displayed behaviors; let’s go with asking a horse to lower its head.

Horse fights pressure: the horse braces its neck against the pressure and refuses to lower its head. You gradually increase the pressure you’re applying.

Correct response: the horse finally dips its nose in the slightest, so you immediately release the pressure. 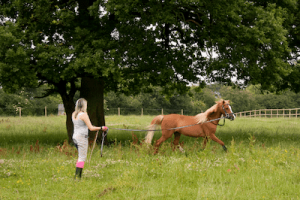 Communicating the boundaries of your personal space is important when working with horses. Horses can weigh 10 times more than humans, which can put humans in a dangerous situation if a horse runs into them, steps on them, or knocks them over. By teaching your horse to respect your personal space, not only are you teaching them where your boundaries lie but you can also help them focus more and pay attention rather than becoming easily distracted.

Besides lack of training, horses often display these behaviors due to one of two reasons. 1) they learn that displaying these behaviors either gets them out of work or gets them what they want faster. 2) they are trying to make you move out of their way. In understanding this, you need to understand a horse’s natural behavior.

First off, horses are like humans; they want to do as little work as possible. If they can find something that helps them avoid work, they will do it. If a horse can put its head up and over you when you try to but its bridle on, that’s a few minutes they get where they don’t have a bit in their mouth. Horses, like humans, are also impatient. If they learn that crowding you at feeding time makes you give them their feed faster, they will do it. At one time, my horse would even push me with his nose after every ride when he wanted to go back to the pasture. 😂

Secondly, horses are herd animals; they like to know their place in the herd. If you watch two horses meet each other for the first time, you’ll notice that they often get in a tiff to see who will chase who first or who will be able to get the other to move first. If a horse can get another horse to move, that horse is the one in charge. Because of this, it’s only natural for a horse to try this with you too. If the horse can move close and crowd you and get you to move away, they learn that they now have the ability to control where you go rather than the other way around.

Some easy groundwork exercises that teach your horse to respect your space includes:

While groundwork is a very useful tool, I find that many people have a hard time initially understanding the concept behind it. I created an online course specifically designed to help people understand why you use certain groundwork techniques and how you can do these techniques with your horse step-by-step. If you’d like to know more, you can check out the online course here.

An aggressive horse can quickly make you lose confidence and not want to be around horses. Not only that, but they can be very dangerous to the safety of you and others. Aggression needs to be nipped in the bud as soon as it’s displayed, as it can turn into a much bigger problem and be much harder to deal with later on.

There are many reasons why horses may display aggressive behaviors. By nature, I do not believe horses are aggressive; more often than not, they usually run away rather than fight. However, if a horse has been through trauma or has not been around humans enough to trust them, they may revert to aggressive behaviors when in a closed-off area. Obviously, these horses will have to be dealt with differently, as they must learn to trust and see that humans are good.

Another common reason a horse may display aggression is that they use it as a scare tactic to get out of work or get what they want. I knew a horse that every time you went to catch it in the field, it would threaten to kick you, or actually kick you. It learned that a human coming out to catch it meant work. I also knew a horse that would reach its head out of its stall and bite anyone who walked by. It wasn’t that the horse wasn’t used to humans, it’s just that he wanted attention.

Always use caution when working with an aggressive horse. My go-to correction for a horse that displays aggression is work. A horse must learn that doing the wrong thing is hard. I mentioned the horse that tried to kick you every time you went out to catch it. We ended up putting her in a smaller pen. If we would go and she would turn her butt to us, we would immediately, take a lunge whip and start lunging her around the pen. She would have to go around and around at a good working gait for at least 10 minutes. Then we would approach her and do the whole thing again. Pretty soon, she stopped trying to kick.

With the horse that tried to bite people, I did the same thing. I took him out and stood him in the aisle on a lead. If someone walked by and he went to bite, I would immediately start making him move around and work. He quickly learned not to bite.

It’s also important to set these horses up for success. If a horse is kicking because they don’t want to be caught, that means that they negatively associate being with humans. Another thing we did with the mare who always tried to kick is we started taking her from the pasture to feed. That way, she started associating a human coming out to catch her with eating.

I hope you found this article helpful. I have many more articles on understanding horse behavior. Check out the ones below!

P.S. Save this article to your “Horse Training” board!