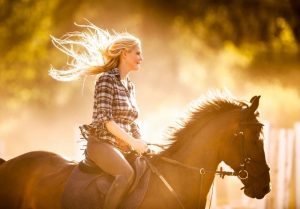 We usually think of horseback riding as divided into two categories – English and Western. But there are many disciplines within these two categories that you should be aware of if you are looking into adopting a new riding style.

Most of these disciplines will fall under either English or Western riding, though Gymkhana and Endurance riding can be under both English and Western. If you’re looking to branch out into new riding disciplines, read on to learn more about the styles listed above! 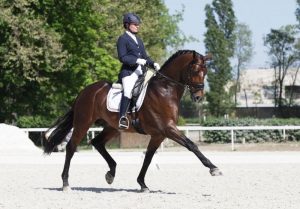 Dressage has been practiced for centuries, and is known as the “ballet of horseback riding”. Dressage is a sport of discipline and high-level training between the horse and rider. The goal is for the horse to perform the three gaits (walk, trot, and canter) in collected, fluid movements both in a straight line and in circles. The rider is meant to ask for these movements using the smallest requests – emphasizing the bond between the horse and rider. Dressage truly does appear to be a dance, and the kur and freestyle dressage tests are even choreographed to music. Dressage is one of the three Olympic equestrian sports. It is also known as the discipline that requires the highest level of training.

Want to know more about dressage? Visit my article, Dressage for Beginners: Everything You Need to Know.

Show jumping is the second of the Olympic equestrian sports. In show jumping, the horse will go through a course with up to 16 pre-determined jumps placed throughout, each providing their own challenge to horse and rider. There are usually many quick turns and other obstacles included in the course to test the mental and physical agility of the horse. Show jumping tests the horse’s finesse and stamina in the arena.

The third equestrian sport included in the Olympics is eventing. Eventing, also called three-day eventing, usually takes place over the course of three days. It includes cross-country jumping, dressage, and stadium jumping. The cross-country segment usually takes place over 4 miles and may include up to 40 man-made and natural jumps, testing not only the skill and athletic ability of the horse, but also the endurance. Eventing is designed to see what horse has the overall skill to compete in all three phases.

To learn more about eventing, check out my article What is Eventing? Everything You Need to Know.

There are a wide variety of horse racing styles. Most of us are familiar with the Kentucky Derby races, but horse racing can vary according to distance, footing used, breeds, and even gaits. Horse racing is one of the oldest sports humans have participated in, and is a multi-billion dollar industry. Racing is one of the most physically demanding sports a horse can participate in, with most racehorse careers lasting only two to three years, and most retiring before the age of five. If racing is something you want to get into, it’s important to do your research about the local tracks and races you may be able to get involved in. One thing to note is that horse racing can be controversial due to some of the practices at certain tracks. 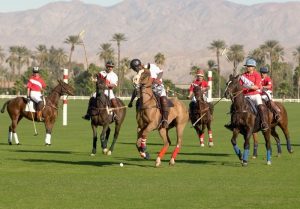 Polo is a team sport played on horseback, with each team consisting of four players. Each player (or rider) has a mallet that they use to push a ball down the field, attempting to make a goal by pushing the ball through the goal posts. Think of hockey on horseback. With all eight horses and riders focused on a single ball, the game can be dangerous due to the close contact alone, and is not for the faint of heart. Polo is a particularly athletic sport, for both horse and rider, and is known as one of the most challenging sports to learn and play.

Saddleseat is a sport meant to show off the naturally high step of some of  certain horse breeds like Saddlebreds, Standardbreds, and Morgans. Saddleseat is a US-born sport that some say is similar to dressage, though there are many differences between the two. In saddleseat you will see heads held high, arched necks, high steps, and exaggerated movements.

In competitive terms, English pleasure consists of three categories: hunter seat, saddleseat, and driving. English pleasure riding is meant to accentuate the horse’s discipline, fine manners, and smooth riding ability. The sport originates from aristocratic society in which horses were the main mode of transportation and those of means would ride their mounts into town, showing off their horse’s excellent manners and rideability.

Western riding evolved from early American ranchers and Spanish settlers. Western riding consists of larger saddles meant for long, comfortable rides, and saddle horns developed for anchoring roped cattle. Read on to learn more about some of the popular Western disciplines – most evolving from activities performed during ranching operations. 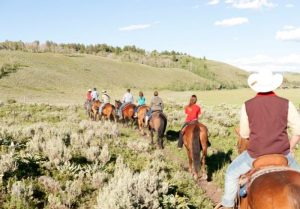 You can trail ride recreationally, or you can trail ride competitively. Trail riding can include trails of varying lengths – some lasting multiple days, and will also include a variety of different natural and man-made obstacles. Trail riding is a popular sport, both for pleasure and competition. While English riders can enjoy the trails as well, Western provides trail class competitions.

Trail riding can be a great way to get you and your horse out in nature, and the good news is anyone can trail ride! To learn some helpful trail riding tips, visit my article 16 Horse Trail Riding Tips: Ultimate Guide.

Reining has been described as the Western’s version of dressage, with its emphasis on fluidity of movements within an arena. Reining is a bit more fast-paced though, and is performed at the lope or gallop. The horses that participate in this sport can wear down quickly, with careers typically no longer than the careers of racehorses. Two popular moves of reining horses are the spins and the sliding stops.

Cutting is a traditional Western equestrian sport where the rider and horse work to separate, or “cut” a single cow from the herd, and keep it isolated. This was once, and still is, an essential task on the ranch that has evolved into a popular Western sport. American Quarter Horses are the most popular horses for cutting, as they have the innate “cow sense” required of Western horses. 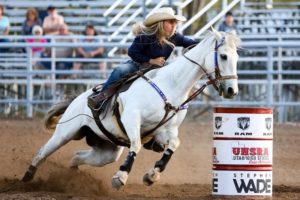 Barrel racing is a rodeo sport in which a mounted horse attempts to ride around three pre-set barrels as quickly as it can. These barrels are set up in a triangle, and the horse is expected to round them in a clover-leaf pattern. While barrel racing times will depend on the size of the arena, most races are over in 15 to 30 seconds. Barrel racing is intense and the winner is often determined by just a fraction of a second.

Roping is another rodeo event, with the sport consisting of a mounted horse and a calf. The goal of the rider is to secure the calf with a rope while in the saddle, before dismounting and tying the calf down. This is a timed event. Roping can be both an individual sport or a team sport, with the team version usually consisting of two horse-and-rider pairs.

Western pleasure is similar to its English counterpart – it is a riding style that is meant to showcase the horse’s good manners under saddle and smooth riding ability. Like English pleasure riding, this is a competitive sport that is performed in an arena.

There are two popular disciplines that are performed both under the English category and the Western category. These are Gymkhana and Endurance riding.

Gymkhana is an interesting name that really means “games on horses”. While gymkhana in the United States is mostly a Western equestrian sport, gymkhana is also popular in England as an English equestrian sport. In both riding styles, gymkhana consists of a number of timed obstacles and mini-disciplines in one “game”. For example, Western gymkhana often consists of barrel racing, keyhole racing, pole bending, and flag racing. English gymkhana also consists of timed games and obstacles, and includes riding between poles and performing games based on medieval jousting.

Both English and Western riders can participate in endurance riding competitions. Endurance riding is performed over trails at a pre-set length. The length of the race can vary from 25 miles all the way up to 300 miles. There are checkpoints throughout the race, typically at least at every 25 miles, to check the overall health and condition of the horse.

Which Riding Style Is For You?

Whether you are an English or a Western rider, you can surely find a discipline that suits your personality and drive. Trail riding and endurance riding might be for the relaxed, easy-going riders. Dressage might be for the detail-oriented and patient rider. Reining and show jumping might be a good choice for those looking to challenge themselves. And if you are a real thrill seeker, perhaps you can try polo. Whatever your personality and preference, there is a riding style (or two) for you.

To get a more specific look at the styles of riding for English and Western, check out the articles below!