What Are the Best Horses For Dressage?

If you are interested in dressage, you will likely want to know which horse breeds excel in this sport. Any horse can be a dressage horse, but some breeds have characteristics that make them more successful in the dressage arena than others.

Which of these breeds are best for you? This may be determined by price, physical characteristics, or bloodlines. To get a more in-depth look at each of these dressage breeds, keep reading!

The Dutch Warmblood has a long, arched neck and prominent withers. They are naturally athletic and have graceful, expressive gaits.

Dutch Warmbloods have the disposition for a successful dressage horse as well – they are agreeable, willing to learn, and happy to please. For a Dutch Warmblood, expect to pay at least $6,000, and up to $25,000 or more. 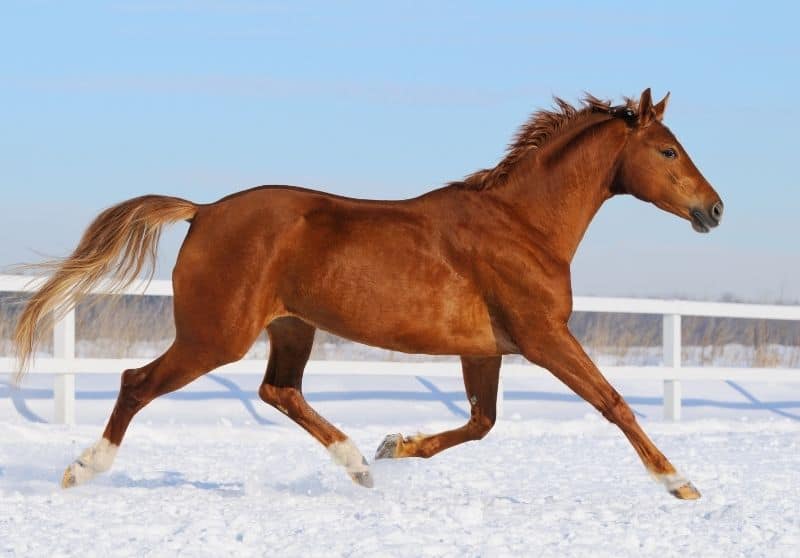 Like all successful dressage horses, Hanoverians are known for their calm and trainable temperaments. Hanoverians have strong, muscular limbs and strong backs. They are agile and athletic, and have the graceful and bold movements that are desirable when competing in dressage. While you can buy a young, unstarted Hanoverian for as little as $7,000, expect to pay $25,000 or more on a started show prospect. 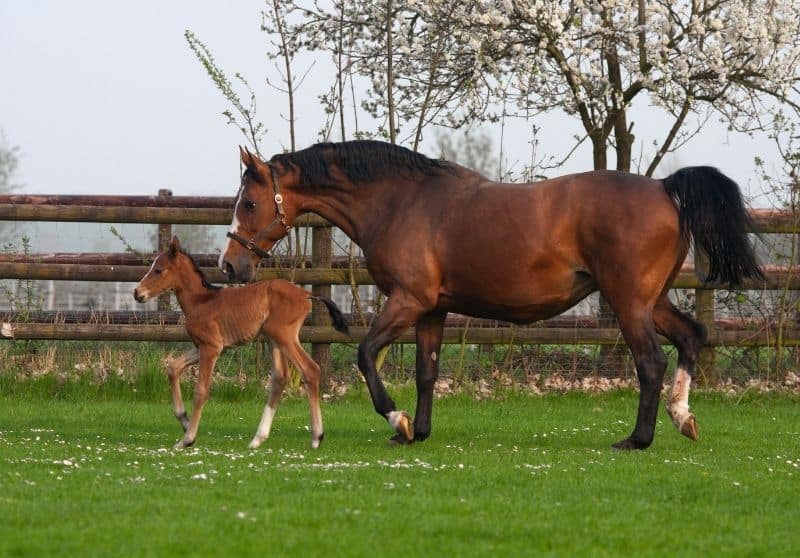 The only other breed with more than one horse in the top 18 of the 2021 Olympics was the Westphalian. This German warmblood has consistently been among the top dressage competitors across the globe.

Westphalians have a lighter build than most warmbloods, but have well-muscled hindquarters and long lines. This breed is known for its bold, expansive gaits and extra flair that is desirable in top-level dressage.

Like most Warmbloods, Westphalians also have the easy-going disposition and trainability that is required for dressage. You will likely spend at least $15,000 for a Westphalian, and much more for a started competitor. 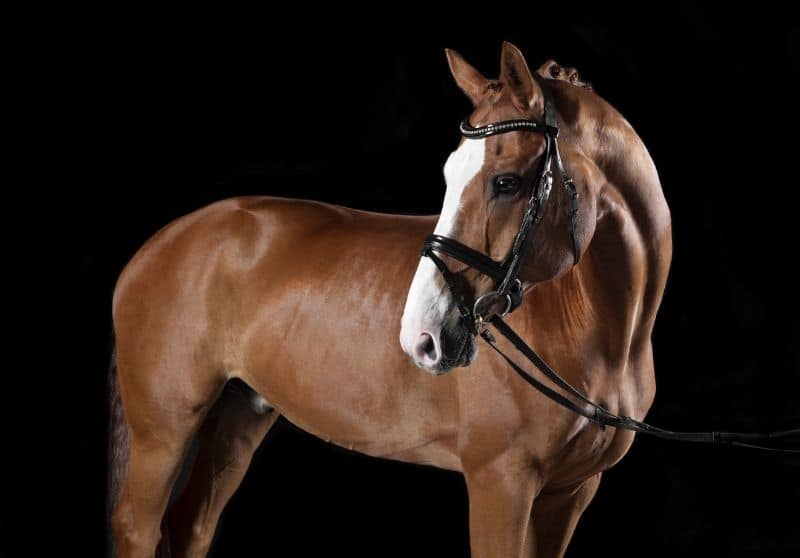 The Oldenburg was the result of an extensive breeding program which included bloodlines from Friesians, Trakehners, Thoroughbreds, Arabians, Holsteiners, Westphalians, and more. Oldenburgs have consistently been highly ranked in the WBFSH standings for dressage.

Oldenburgs are bred for a long neck and uphill build, but otherwise there is a large variety in Oldenburg conformation. The Oldenburg registry allows studs of other horse breeds in its ongoing breeding program, and the understanding when it comes to Oldenburgs is summed up in their famous slogan “quality is the only standard that counts”.

Most Oldenburgs have expressive, elastic gaits which give them success in the dressage arena. They are also known to be well-mannered and highly trainable. In recent years some Oldenburg breeders have come under scrutiny for breeding their horses too “hot”, so if you are interested in looking for an Oldenburg to compete with in dressage, make sure to look into his breeding and disposition. The cost of an Oldenburg will start at around $10,000 to $15,000, but will be much higher for a top competitor.

This Irish Sport Horse was developed by crossing the powerful Thoroughbred with the gentle Irish Draft Horse. The resulting athletic and friendly Irish Sport Horse has been bred over the years to excel at top-level sports, including eventing, jumping, and dressage.

The Irish Sport Horse has a long neck, balanced proportions, and well-defined bones. This breed gets its good nature from the easy-going Irish Draft, and is highly trainable and eager to learn. Irish Sport Horses are both gentle enough to make excellent family horses, and athletic enough for high-level dressage. Irish Sport Horses are not very common in the United States; expect to pay at least $20,000 for a show prospect. 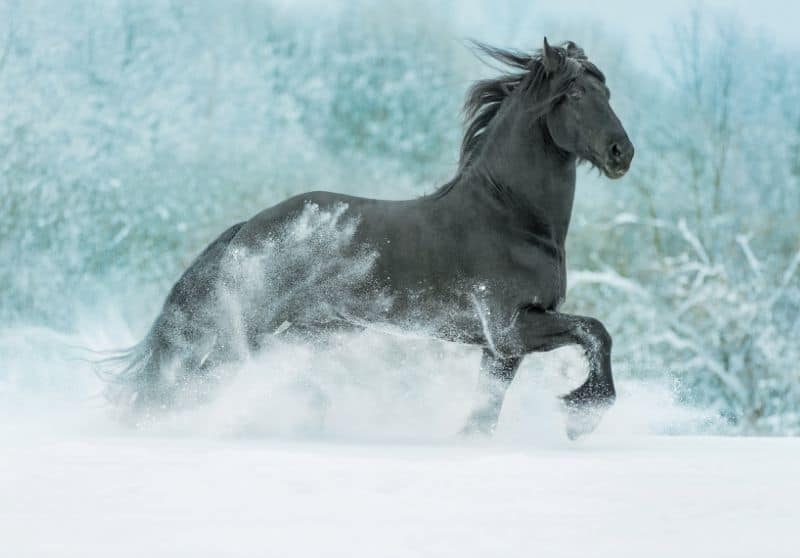 Friesians are one of the most recognizable horse breeds, with their strong build, their elegant looks, and their solid black coloring. Friesians are beautiful horses, and they have the extra flashiness that gives them a leg up in the dressage arena. Friesians are also the only cold-blood breed on this list, and are considered a light draft horse.

Friesians are gaining popularity in the dressage arena, and for good reason. They have an uphill build, long necks, and powerful shoulders and hindquarters.

Friesians are known for their elegant movements and their springy, high-stepping trot. As for temperament, they are prized for their coldblooded personalities and are known to be gentle, energetic, and willing to learn. A Friesian will cost you at least $20,000 and will go up from there. 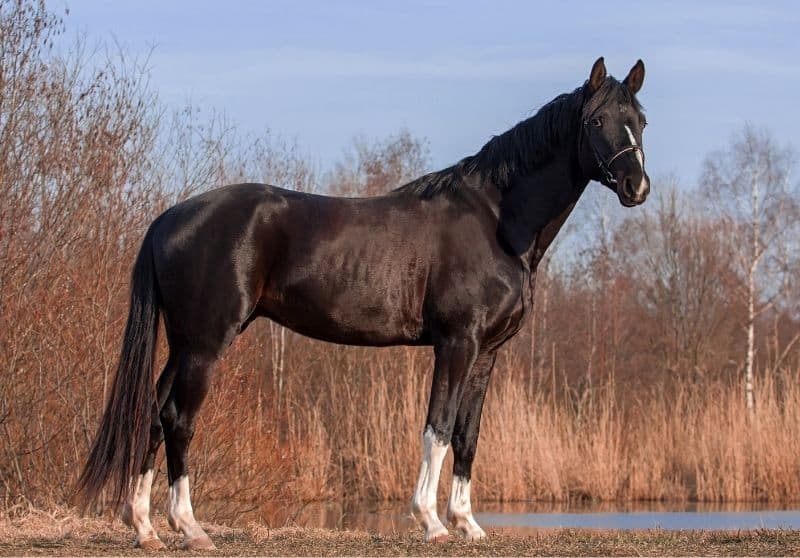 The Trakehner is another lighter-built warmblood that makes an excellent choice for dressage. The Trakehner was originally developed as an ideal cavalry mount, and has evolved into a sporting horse known for its elegance and its endurance.

The Trakehner is known for its elegant appearance, its expressive eyes, deep chest, and strong withers. While the Trakehner’s conformation gives it an edge in the dressage ring, its personality adds to its desirability. Trakehners are known to be generally calm, willing to learn, and obedient. You can expect to pay at least $10,000 for a Trakehner, and much more for a show prospect. 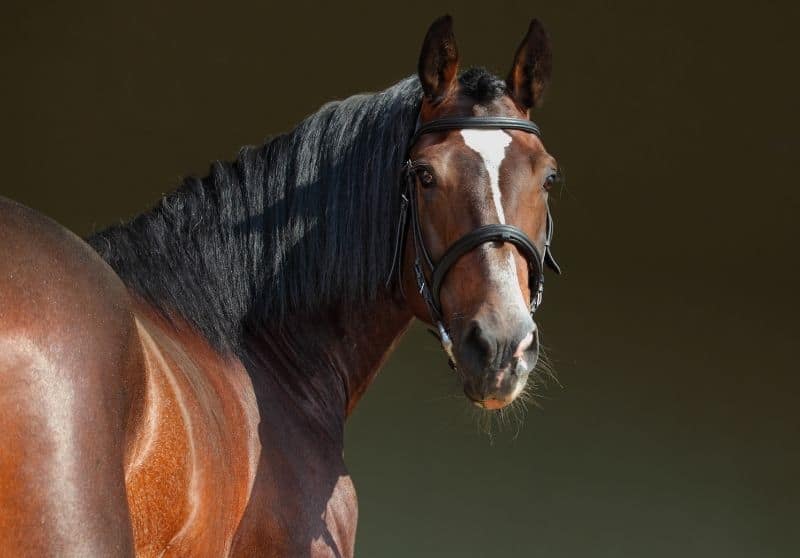 The Holsteiner is one of the oldest warmblood breeds, originating from 13th century Germany. Holsteiners are tall horses with an arched and high-set neck, powerful hindquarters, and proportionate builds.

The Holsteiner has graceful and generous gaits, with an especially soft and balanced canter. They have bold movements and flexible joints. As for temperament, Holsteiners are generally reliable, trainable, and easy-going. Overall, their elegant conformation, graceful gaits, and agreeable personalities are why they are consistently ranked in the top 10 horses for dressage by the WBFSH. Most Holsteiners will cost between $10,000 and $30,000. 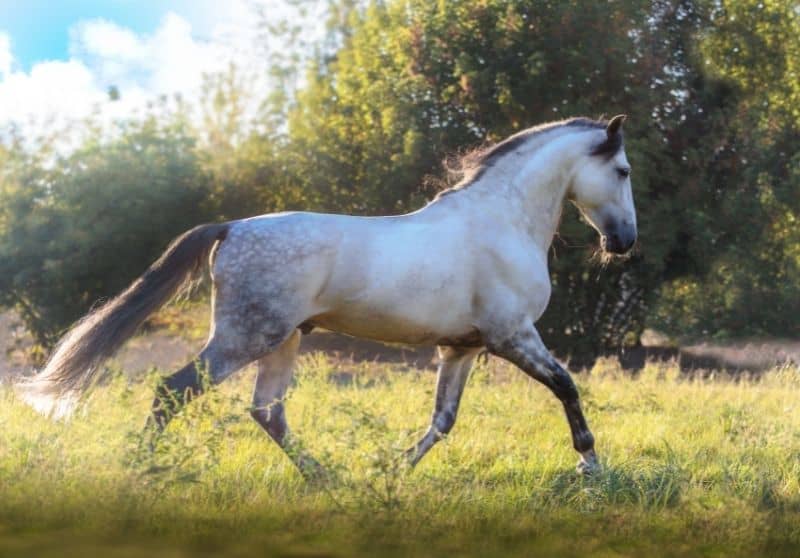 Iberian breeds, such as the Andalusian, are increasing in popularity among dressage competitors. Andalusians are striking horses originating from Spain and were originally used as cavalry mounts.

Andalusians have fluid, expressive movement and seamless gaits which allows them to excel at dressage. These horses have long necks, large chests, short backs, and well-muscled hindquarters. They have elegantly long manes and tails and are known for their flashiness.

Along with their sophisticated appearance, Andalusians are generally docile, gentle, and intelligent. They are eager to learn and responsive to their handlers. A young Andalusian may cost you $10,000, but for an active competition Andalusian you can expect to pay at least $40,000 to $50,000. 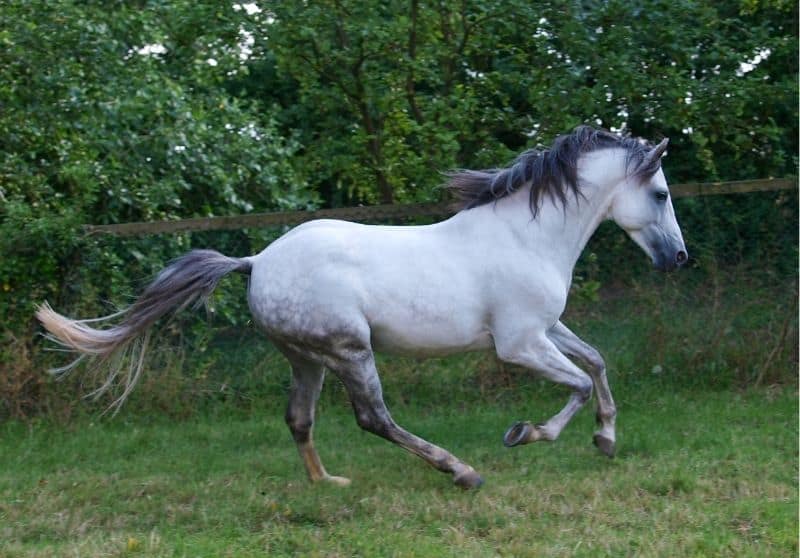 The Lusitano is another Iberian breed and is closely related to the Andalusian. Lusitanos are becoming increasingly popular in the dressage arena, with their exaggerated yet comfortable gaits. In the 2021 Olympics, every member of the Portugal dressage team rode Lusitanos and finished in 8th place. In the same games, a Lusitano made it to the individual dressage finals.

Lusitanos have long and muscular necks, well-sloped shoulders, and strong backs. They are powerful horses that excel in sports where they can put their athleticism on display. Lusitanos are intelligent, willing horses and are generally eager to learn. Lusitanos were originally bred for bullfighting, and while most modern Lusitanos are docile, they can run hot if not worked regularly. If looking for a Lusitano to compete with, make sure that you familiarize yourself with the individual horse to determine his temperament. You can expect to pay at least $10,000 for a young Lusitano, and significantly more for a started show prospect.

Traits Of A Successful Dressage Horse

When looking for a dressage horse, you want to focus on three factors. The first and arguably most important factor is the horse’s personality. You want a horse who is cooperative, pleasant, and willing to learn. The next factor you will consider is the horse’s gaits. You can refine the gaits to a point, but you want to start with solid and correct movements. The third factor is conformation. There is no perfect horse, but some imperfections will present challenges in the dressage ring. While you can find these three aspects in any breed of horse, the ten horses listed above will be a good starting point if you are looking for a horse to join you in the dressage arena.

What horse breeds do best in other riding disciplines? To learn more, visit the articles below!